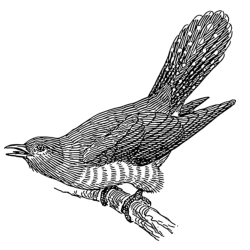 No pages about Marsden would seem to be complete without the story of the Marsden Cuckoo!

Signs that the long harsh winter was turning into spring were extremely important for people living in the Pennines. The appearance of he crocuses, snowdrops and daffodils proved that spring had arrived.

According to tradition the evocative sound of the first cuckoo is heard in the Colne Valley on 24 April at Marsden Spring Cattle Fair.

The legend of the cuckoo, not unique to Marsden, has several variants.

1. A cuckoo had taken up residence in a field and several people decided to capture the bird, in order to keep the Spring, by adding an extra course to the wall. As they added stones to the existing wall the bird became frightened and flew away, just skimming the wall, thus proving to a Marsden onlooker that the wall was a course of stones too low.

2. The second version relates that the first cuckoo is heard at Scout, an area just south of Marsden, an area which it still frequents. An inhabitant wanted to keep the cuckoo in the tree in which it lodged, so he set about building a walled structure around the tree. He had practically completed the task and was in the process of adding a roof when the bird took flight and made an escape.

3. Yet another version of the story tells us that a cuckoo had lodged itself in a chimney. An attempt was made to add some bricks to the chimney in order to prevent the bird from flying away. Of course, the cuckoo made its escape.

The story of the attempted capture of the cuckoo has been told, with various changes, in other villages. The village of Austwick in Yorkshire is credited with making the first attempt.