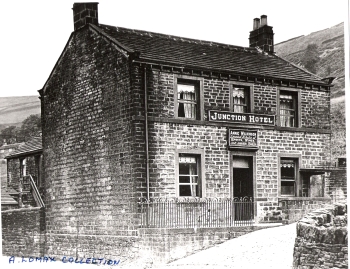 There was ale house called The Tunnel at Waterside situated near to the bridge over the canal at Tunnel End which served the navvies working on the construction of the canal.

In 1841 it was being run by Isaac Marsden who described himself as an innkeeper and boatman. By 1850 the inn had been relocated further up the pathway onto Waters Road 'in part of a field called Lower Tongue'.

It took the name the 'Three Tunnels' when the canal tunnel and the two railway tunnels were all completed in 1871.

By 1889 the inn was re-named The Junction and, in 1989, it was given the name The Tunnel End. The inn closed in 2013 and is currently being converted into two houses.