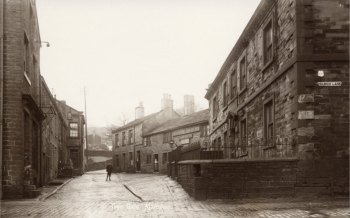 The Old Ram Inn, built in 1725 at the top of Towngate, was the last port of call in the village for travellers using Old Mount Road. Coaches carrying goods, passengers and mail halted at the Ram before continuing up the hill. Passengers were invited to walk up the steepest part to relieve the considerable effort required of the horses.

William Gill, owner of the inn in 1839 sold the property. An advertisement for the auction of the inn described it in detail. "All that old-established and well-accustomed Inn or Public House known by the name of The Ram Inn, with Brewhouse, Barn, Stables, Cowhouse and other Outbuildings and conveniences with spacious Yards, well supplied with a never failing Spring of soft Water, situate in Marsden together with Three small Fields of Grass Land, containing Two Acres, Two Roods and Four Perches, more or less. Also One Beastgate or Cowgate in and upon a certain Pasture called Holm Moor Cow Pasture and the Privilege of getting Peat and Bedding upon Pule and the Liberties thereof."'

The extensive stabling and the employment of grooms and ostlers confirms the role that the Ram took in providing for the increase in wheeled traffic. A report in 1825 lists the various carriers who used the inn as their base. James Horsfall transported goods to Huddersfield every Monday and Tuesday mornings and conveyed goods to Manchester every Friday evening, returning the next day. From 1827 the inn was home to the Royal Foresters Friendly Society. A report in the Huddersfield Examiner described their annual dinner which "was anticipated with pleasure by the members and their wives. The Foresters used to march through the village wearing their regalia. After dinner the company would repair to the Old New Inn to indulge in favourite beverages until the tables had been cleared at the Tup when they re-formed their procession and, with great ostentation, the company returned to the Old Ram to continue their festivities".

The widening of Church Lane necessitated the demolition of the inn. The land behind the inn became part of the church burial ground. The Huddersfield Examiner reported on the closing of the Old Ram Inn in January, 1926 "By the closing became known locally on account of its close association with the social life of Marsden. Behind the inn itself was another room known as the 'Tup Chamber' which was used for [arties and gatherings of a social and semi-public character".

When its licence was suspended, £2,380 compensation was paid to the owner.