Town School in Brougham Road was the first purpose built school in Marsden. It was erected in 1820 at a cost of £400 raised by public subscription. It became known as Mr. Webster's school as he was the first headmaster, staying in post until his death in 1876. He was appointed at the age of 25 and lived in Idle Row. Fees were 10 pence per week. 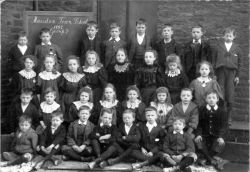 In 1877 the school was rebuilt at a cost of £1200, again raised by public subscription. Part of a piece of land formerly called the Haum Ing Nook was incorporated to form the girls' playground. William Griffiths, a Welshman, was head during the 1890's and in the early 1900's. In 1879 an Infant's Department was opened in the Mechanics Hall with Miss D. Killin as mistress.